This article, Welcome to Freneskae!, is the creative property of Morgoth Bauglir.

Welcome to Freneskae! is one of the hardest quests ever released by Jagex. It was released in 1st January 2009, being the 200th quest, and is the only quest to require a skill over 90.

To start go to Azzanadra's chamber at Jaldraocht Pyramid, wear your Ring of Visibility, stand in front of the altar and cast NPC Contact. That will make you start a conversation with Azzanadra. He will tell you that he needs you to call some friends from Freneskae (NOTE: If you are under 120 combat, he will say you are too weak and tell you to come back when you are stronger), the problem is that no human has ever gone to Freneskae. For that to happen, you will need a portal with ancient, fairy, abyssal and lunar magic bound into it. Azzanadra will explain what you need to do to open the portal.

Go to the fairy resistance hideout (use AIR, DLR, DJQ, and AJS fairy ring codes in a row), and talk to the Fairy Queen, ask her where you get tainted fairy mushroom spores. She will ask you why you want them, say that it is for spreading good throughout the land, if you say it is for creating a portal she won't give them to you, and you will have to buy them from the Fairy Godfather for 10k gp each. However, the queen only has seven of them, and you will need at least five, so if you fail more than two, you WILL have to buy them. Now you need to taint them, to do this, you will need a bucket of ectoplasm, swamp tar and rotten food (just get any cheap food and go to the Mort Myre Swamp without your holy sickle, and wait until a ghast rots it). Use them on the bucket then click again on it to stir the mixture, now you need to kill another player with a Syrinx to add human blood to the mixture. Now throw the spores inside the mixture and wait for one hour, then go back to the pyramid and talk to Azzanadra, he will cast a spell of evil on the spores. The spores are ready, you can bank the, now.

Get your Seal of passage and go to Lunar Isle. Talk to the Oneiromancer, ask her how to get an amulet to go to Freneskae, she will explain that everything from a plane has a tendency to go back to it, like a magnet. For example, since you are made from Gielinorian material, it will be harder to get out of Gielinor, and easy to get back to it from another plane. However, she has no idea how to get anything from Freneskae. Go back to the pyramid to talk to Azzanadra, he will say that dragon weapons are from Freneskae. Get a magic string and a dragon dagger (other weapons won't work) and use them on each other to get a Freneskae Amulet.

According to Azzanadra, the reason why Gielinorians can't go to Freneskae is because the Abyss is a very strong barrier between the two planes, therefore, opening the portal there will be much easier. Now get the tainted mushroom spores, a seed dibber, a soul rune, 4 blood runes, 4 death runes, the Freneskae amulet, a lunar staff, an abyssal whip, good food, and the best anti-magic armour you have and go to the abyss (be careful with the revenants, and the abyss accessed from fairy rings won't work). Go to the middle, near the mage, and click on the seeds to plant them. However, the mage will ask you what you are doing, tell him you are trying to open another rift. The mushrooms with grow in about 5 minutes, after they are grown, wield your whip and flog the tainted fairy ring, then cast a blood barrage on it, the portal is now complete! 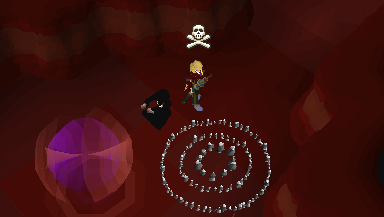 Wield the lunar staff, the Freneskae amulet, your anti-mage armour and switch anti-magic protection prayer on. Click on the portal, you will get a message saying it might not be safe to enter the portal. You will arrive in the middle of a battle in some sort of cave, it is multicombat and packed with monsters over lvl 150, mostly mages who can hit through prayer sometimes. Run east as fast as you can until you reach a stone fortress (the Mahjarrat base), the guards will ask you who are you and who sent you, answer that Azzanadra sent you and they will let you in. Go to the middle of the fortress and talk to Sliske, after some long explanation of whats going on in Gielinor and how you got there, say that Azzanadra needs friends of Zaros back there. Sliske will say that he would go, but he needs to stay in the fortress to protect it and they are running out of weapons. Ask how you can help, Sliske will give you a dragon pickaxe if you are lvl 95 mining (you cant teleport away with it) and tell you to go mine ten dragon ore and give them to the Necrosyrtes.

Go to the easternmost part of the fortress and mine the dragon veins until you have 10 dragon ore, then go to the north inside the building with the anvil symbol in it and give the ores to one of the Necrosyrte, unfortunately, he will get the dragon pickaxe back. Go back to Sliske, he will say that if you assassinate the Karn leader he and other soldiers will go to Gielinor.

Go to the building west of the Necrosyrte building and go down the ladder, walk east, checking the walls for traps. After you reach the Karn fortress, go up two sets of stairs. Kill the two lvl 150 guards who use melee and picklock the door. The Karn Leader will immediately attack you, he behaves like a magic pure, with low melee defence and HP but very high magic, he is lvl 125 and casts all the barrage spells, so be careful of him freezing you, poisoning, healing and lowering your attack. Drink potions and pray anti-magic (will reduce 50% the chance of him hitting you), eat when necessary until you defeat him. He will drop some schematics, pick them up and go back to Sliske, give the schematics to him. Congratulations, you completed the hardest quest of RuneScape! 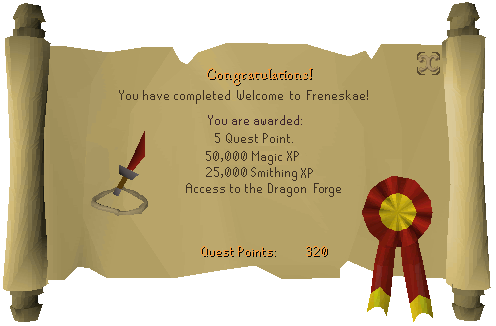 The Dragon Forge is under the building with the Necrosyrtes in it. You need to be wielding a smithing cape to make anything of dragon. Each dragon bar requires one dragon ore and sixteen coals, may only be made in the Dragon Forge and has a 75% chance to fail (wielding a ring of forging reduces it to 65%). To make the weapons, you need to be wielding a granite maul or an obsidian maul (Ket-om), and it also has a 75% chance to fail.

Retrieved from "https://runescapefanfiction.fandom.com/wiki/Welcome_to_Freneskae!?oldid=103427"
Community content is available under CC-BY-SA unless otherwise noted.