Dragon Slayer Part 2 is the second part of the Dragon Slayer series and is much harder than the previous quest, after finishing the quest players may equip the ultimate Melee and Ranged body armours: the Ancient platebody and Yellow d'hide body.

Talk to Oziach in the north-west corner of Edgeville. He will tell you that Elvarg's head has been stolen. He then tells you to go to the Guildmaster to see if he knows anything about it. Make your way to the Champions guild and enter. Inside you'll see the Guildmaster so talk to him. he will tell you that he saw some monks covered in purple robes carrying a mysterious bag and that maybe they have something to do with it. Ask if you can help and he will test to see if you are strong enough for the challenge.

You will be transported into an empty room and the Guildmaster will rush in to attack you. he will be quit easy to beat since his only level 10, but then he comes back for you this time as a level 30. After you defeat him he will come back yet again even stronger as a level 60. Defeat him again and he will become a level 100. Once you defeat one more time, him he will give up and say you are worthy of the challenge. And afterwards will give a key to open the trapdoor in the back of Champions' Guild.

Note: Dying to the Guildmaster will not result in losing your items.

Climb under the trapdoor in the back of Champions' Guild and you'll arrive in an agility course:

Make your way along the agility course until you reach the end. In the southwest corner you'll find a chest next to a skeleton and by one of the walls there is a mysterious locked door. Open the chest and you'll find Stone key loop and Dragon bones, but these bones cannot be buried. After opening the chest the dungeon starts to shake and your player will loose 200 hp every 5 seconds so quickly teleport out. (If you lose any of the items from the chest then you can reclaim them by going through the agility course again and opening the chest).

Go back to the Guildmaster and show him the Stone key loop and he will tell you that this key may be needed later on. Then show him the dragon bones and he will tell you that the bones belong to a powerful Yellow dragon, a type of dragon which has been extinct for many years. He then tells you to go back to Oziach and tell him what you have learned.

As you enter Oziach's house a cutscene appears, which shows three mysterious monks fighting Oziach. Oziach easily defeats them and forces them to tell him who they are, but then your player walks into the room, distracting Oziach and allowing the monks to teleport away.

After the cutscene ends, talk to Oziach and ask him whats just happened. He will tell you that he has no idea himself, and that he was ambushed in his house. Go to the corner of the room and there should be a Zaros sigil on the ground. Pick it up and show it to Oziach. He will tell you that it looks like the sigil that the Desert bandits wear as a necklace, and suggests that one of them might know who the monks were.

Make your way to the Kharidian Desert just above the pyramid where Eblis is. Before talking to him make sure you have more that 300 hp and have the Zaros sigil in your inventory. Show him the sigil and you will inform Eblis of what had happen in Oziach's house and then ask him if he knows who the monks were, only for him to refuse to answer. Use the beer on him and as he drinks it he starts to feel dizzy but he still won't answer your questions. Use another beer on him and he will feel a lot more dizzier but still refuses to answer to your questions. After giving him your third beer he will answer the question you ask him: the monks were sent by Yuri, Eblis's father, to steal Elvarg's head and use it to revive her. When you ask him why his father wants to revive Elvarg, he tells you that Elvarg has the power to control the ancient Yellow dragons and with that power he can take over the whole of the Kharidian Desert. You then ask him why the monks had ambushed Oziach and he tells you that Oziach is the only one who knows how to stop the revived Elvarg.

After you finish talking to Eblis an ice Barrage is casted onto both you and Eblis dealing up to 300 damage. You survive the cast but Eblis dies and his last words are "Why, father?"

The Only way to stop ElvargEdit

Teleport to Varrock and go back to Oziach. Tell him what you have learned, and he will tell you to stop Yuri before he destroys the whole of the Kharidian Desert. He then tells you that if Elvarg is revived, she will be immortal and undefeatable and the only way to stop her is by enchanting the five dragonhides (Red, Blue, Yellow, Green and Black) and using the enchanted dragonhides on her to slowly take away her immortality. You then ask Oziach how to enchant the dragonhides but he doesn't know and tells you that you'll have to discover it for yourself.

Talk to him again and he will enchant the four dragonhides you have and will then ask for your yellow dragonhide, after telling him you were unable to obtain it he gives you a stone key tooth and tell you that the only way to obtain a yellow dragonhide is by killing a Yellow dragon which is located in Champions' Guild Dungeon which is below the Champions' Guild. Combine your Stone key tooth with your Stone key loop to make a stone key.

Items needed: Protection against dragonfire, Food (monkfish or above), Strong armour, a Teleport tab, The key to the trapdoor, Dragonstone (cut)

Make your way back to the trapdoor outside the Champions' Guild and enter it. Go through the agility course as you did before but when you reach the chest don't open it or the whole room will shake as before. Use your Stone key on the locked door to open it and you'll find yourself in Champions' Guild Dungeon. Beware this place is covered with yellow dragons and it is strongly advised that players entering the dungeon should have a protection from dragonfire.

With the enchanted dragonhides in your inventory, go back to Champions' Guild Dungeon. This time, run past the yellow dragons through a pathway that splits and merges twice, and you'll find yourself in a room with three pathways: one to the west, and two to the north. Take the western path, and open the door leading to the pathway. This leads to an area without yellow dragons. Walk to the area, and you should see a room with controls system. After walking up to the controls system, a cutscene appears showing Yuri reviving Elvarg using his Ancient Magicks. After the cutscene is over, use your enchanted dragonhides on the control system, causing Elvarg to be revived as a skeleton. When Yuri realizes what has happened, he is furious and demands the Skeletal Elvarg to attack you.

When you are ready, walk into the northwestern room with the Skeletal Elvarg and Yuri, and you will be attacked immediately by the Skeletal Elvarg. Whilst trying to kill Elvarg, Yuri will start to randomly use his Ancient Magicks on you which could deal up to 3,000 damage, so the Protect from Magic prayer would really help to reduce the damage of his attacks. Elvarg is able to poison you, dealing 100 damage, so antipoisons would also be recommended. After killing the Skeletal Elvarg, Elvarg's head should drop on the ground along with 15 dragon bones (noted). After Elvarg is dead, Yuri will rush in to attack you. He is easier to kill than Skeletal Elvarg, but by not wearing the right armour and not using the Protect from Magic prayer, he would be dealing a lot of heavy damage. Using ranged is also very helpful, as Yuri is weak against ranged and has the ability to stop players from moving, so melee would not be recommended. After killing Yuri, pick up Elvarg's head and teleport out of the dungeon (if you forget to pick up Elvarg's head, then you'll have to go back to collect it).

With Elvarg's head in your inventory, go back to Oziach and give him the head and he will reward you. He will give you a piece from the yellow dragonhide armour set and there is a 1/5 chance that he will give you an Ancient platebody. 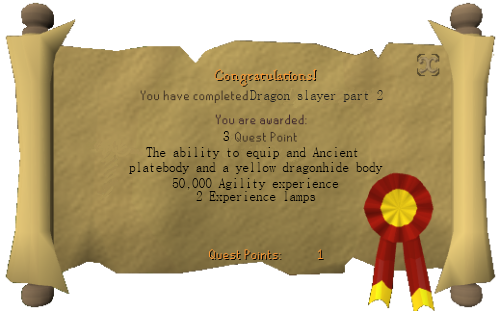 Retrieved from "https://runescapefanfiction.fandom.com/wiki/Dragon_Slayer_part_2?oldid=107102"
Community content is available under CC-BY-SA unless otherwise noted.