This article, Camel Calamity, was created by Quilafa.

Camel Calamity is a very long length Fifth/Sixth Age quest featuring Urluk, Akthanakos, and many more characters. During the quest the player have to encounter problems that are not just encountered by camels, but can become a treat to the humans that live within the Desert eventually! You won't be able to do all of this by yourself, therefore you will join forces with Urluk, "The Prophet" and an unlikely ally. This quest is being set as a "timeless" quest, meaning that it can both take place in 5th and 6th age, although canonically it takes place during the fifth age.

Talk with Simon Templeton near the Agility Pyramid to begin the quest.

Go to Urluk who can be found in the Merchant District in Menaphos.

Choose the option: May I ask you something personal? (Camel Calamity)

Go to the Lisah who is located before the house north of Urluk and next to entrance to the golden city. You can also go to the Menaphite perfume seller to get a funny dialogue in which he eventually faints.

If you haven't got the Vial packs already, Obli's General Store is close to a lodestone and has a stock of 20 packs. The Lighthouse Store and the Moon Clan General Store also do have 20 packs but require quests to complete them, for more locations see here. Once you manage to collect the packs return to Lisah.

Collect the buckets and return to Lisah.

Go to Urluk and use the buckets on Urluk (you only have to click once though).

If you completed Our Man in the North.

Return to Urluk once you have obtained the items. Make sure you equip the equipable items (except the staff if that isn't a camel staff) and nothing else.

Run out of the city, make sure you avoid Guards with at least 5 spaces. Once you walk next to Lisah, she will say: Oh the gods, what is that smell?, quickly go out of the gates.

Make your way to the Camel Warriors' island. Jump to the island and equip the token on the small island between the mainland and the island.

Enter the island, this will now be an instance you aren't able to fight with any camel warrior, instead examine. Walk around the island until a camel warrior appears in front of you.

Return to Urluk, you can Teleport to the lodestone and walk north or use another way.

Ali the Wise can be found in the small north-western most building in Nardah. Consider using Fairy ring code DLQ and heading south to get into Nardah or use the teleport option from a Desert amulet 2 or higher.

The Temple of Death[edit | edit source]

Follow the compass and it will lead you to Enakhra's Temple, enter the temple and go to the bottom floor. There you encounter six Dark wizard level 66, and six Monk of Zamorak. Talk with one of them.

The Monks and Wizards will attack you. The Monks will use protection prayers and boost the Wizards' stats, while the Wizards attack with Elemental spells and Curse spells. Despite their numbers, they are not really hard to deal with. When all enemies have been slain, Enakhra's voice will be heard.

The fallen enemies will turn into Boneguard (level 126), and several pile of bones will spawn all around the room. The Boneguard has 50,000 lp, yet a low damage output especially if you are using Protect from Melee. The pile of bones only have 1 lp, so they are quickly to dispatch. Yet the Boneguard is able to absorb them, boosting it´s attack with 10% and heal it with 50% of the total damage (if the Boneguard has suffered 10k of damage it will heal 5k). Multitarget attacks can be used to get rid of them quickly. The Boneguard can also convert a pile of bones into another Boneguard, yet it won't be as big or have as much hp as the original Boneguard. Once defeated the Boneguard, Enakhra herself will appear and a cutscene begins to play.

Wahisietel teleports in, the camera doesn't move if you haven't (partly) completed Ritual of the Mahjarrat so he remains unseen.

You will find yourself directly out of the temple but your savior won't be there.

Return to Ali the Wise in Nardah and talk with him.

The Compass will now lead you to the area north of the Desert Mining Camp. When you arrive at the spot Akthanakos will appear.

Make your way back to the Camel Warriors island. It is recommended to take combat items with you. When you get there Akthanakos teleports in front of you.

The camel will get a Timer Bar above it. Around the Camel several Spiritual energies appear, click on one to send it back to the camel so the timer bar won't run out. If one of the energies becomes enriched, it will go double as fast. If the timer above the Camel runs out you will have to fight another Camel Warrior (though this one will only have 20,000 LP). Higher Divination and Summoning will help. After a while Akthanakos will be finished.

Place the totems of blocking as seen on the map.

Make your way to Sophanem and talk with the High Priest.

You will need 10 spades and bronze pickaxes or higher. Please note that the tier of the equipment makes the upcoming part easier but you can give better pickaxes later if it's too hard. For the other items you can just go too Shantay Pass Shop and buy it all for 1,900 coins. Use all the items on the bag's (it does not accept noted items) and return to the high priest.

Digging out the Pyramid[edit | edit source]

Return to the Camel warriors Island and talk with Akthanakos who is just before the entrance.

The 10 miners will appear, Enakhra and Akthanakos will be fighting and 6 dark wizards level 66 will spawn. You must ensure that the miners (who will walk) get to the pyramid safely as sometimes a spell is being shot at a miner, you can block it by standing in front of the miner (you will get up to 4,000 damage). A miner would be instantly killed and if all miners are dead, you will have to start over. The Dark Wizards, however, will target you. The more miners you safe, the quicker the next part will go, once they reached the pyramid they will start digging and Enakhra will turn any killed miner into a level 126 Boneguard (so if 9 miners were killed you will have to fight 9 Boneguards). If you did a excellent job and less then 3 are killed Enakhra will kill up to 3 miners.

The Boneguards will try to kill any surviving miners and they can kill a miner very quickly, but not instantly. Ensure you also block any deflected spells as every miner killed will be turned into a Boneguard. The miners will be digging inside the sand with a progress bar, the more miners, the faster it goes. If you got nothing to do you too can help (using the Spade and Pickaxe in your tool belt or inventory). Once the timer ran out a cutscene will play.

One miner will happily cheering come up and Enakhra kills him with a blast. The player evades the new boneguard and runs to the hole. There the player will find a door. Enakhra shoots a blast to the player but accidentally kills the boneguard with her own blast. Then she focuses on Akthanakos again.

Enakhra and Akthanakos will both fight off 3 Corrupted Camel warriors each, you must kill the last one. The corrupted camel warrior like any other Corrupted Creature does give Corruption stacks with 5 at a time so a Feather of Ma'at is useful to cleanse the stacks. The Corrupted Camel Warrior does create illusions much like the normal Camel Warrior but unlike small miniature versions it will summon other Corrupted Camel Warriors with less hp, they will also do the sandstorm attack so be careful! They will also send ancient magic spells to the player, much like mirages, smoke lowers accuracy by 5%, Shadow lowers damage by 5%, Blood heals the caster and Ice binds for 10 seconds. Once you are done help either Enakhra or Akthanakos with killing their opponents.

a Corrupted worker runs to Enakhra, she quickly burns it.

Akthanakos and the player walk to the door.

The puzzle is very similar to a Puzzle encountered in Treasure Trails, however this time the empty space is in the upper left corner instead of the down right corner. Once the puzzle is solved, you will see a camel head like you also see around the door. Use the camel head on the one place where you do not find a camel head and the door will open.

If you are not prepared for a fight, go to a bank and ensure you are. Then once you are ready click on Enter. You will come in a large pyramid, with golden camel statues, sarcophagus shaped for a camel, various urns, and mummified camels.

Go to the south-western corner, but be careful for wall spike traps and floor traps! Once you are there a cutscene will start to play, various Corrupted creatures (including camel warriors) will come out of a hole. Urluk will summon 3 mirages and the two parties begin to fight. You can hit the slayer monsters even if you Slayer level is below level 88, but if you do not meet the requirements to kill a corrupted creature your damage will be halved. At the top of the screen there will be at timer, once the timer runs out the corrupted creatures will stop spawning.

Enter the cavern, you will come in a tunnel, the tunnel is unsafe as various Corrupted creatures will come through blocking you path, destroy them to make way. Eventually you will get to the Sophanem Slayer dungeon like Akthanakos predicted, and you will find yourself at the entrance to the room full of Corrupted Camel Warriors, next to the room with the Corrupted Workers, but it's closed off with a barrier.

Once you return a cutscene plays, both Akthanakos and Enakhra blow up the tunnel.

Place the totems at the places that Akthanakos mentioned. If you happened to forgot you can always ask Akthanakos directly outside the pyramid for a funny dialogue, or you can simply read back.

Go to Akthanakos and Urluk outside the pyramid and talk with them.

You will see Jabari next to the chest at the depths of the Sophanem Slayer Dungeon. 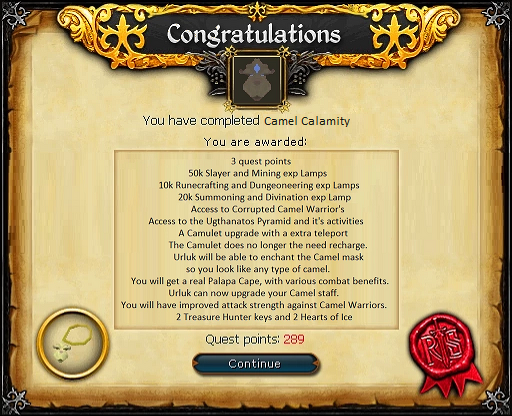 You can talk to Khoochak the Parrot in the Al Kharid palace to retell the adventure.

Retrieved from "https://runescapefanfiction.fandom.com/wiki/Camel_Calamity?oldid=108860"
Community content is available under CC-BY-SA unless otherwise noted.